The French-American Foundation hosted its Transatlantic Forum on North Korea on Wednesday, February 21st.  In an increasingly interconnected global environment, our members-only events assemble French and American leaders in business, politics, education, and culture who care about enriching the transatlantic relationship. Our dinner discussions provide the ideal backdrop for open exchanges on topics of mutual interests.

February’s salon dinner featured keynote speaker Dr. Stephen Noerper, Korea Society Senior Director and Columbia Professor.  Dr. Noerper engaged the group in an interesting, and somewhat alarming discussion on “Managing the North Korean Challenge.” As a former State Department senior analyst, a frequent guest on international network talk shows, and the author of more than seventy publications on Korea and Northeast Asia, he fascinated our guests with his in-depth analysis and predictions about the sensitive topic.

Dr. Noerper described North Korea as a global challenge that poses a missile and nuclear threat with chemical weapon capabilities similar to Syria’s and many contacts in that country. He shared his statistical prediction on the possibility of war and stressed the importance of a multilateral dialogue.  Should America and its allies take military action against North Korea, the ripple effect would be felt across the transatlantic corridor. Issues under consideration are the redistribution of North Korea’s nuclear stockpiles and the assimilation of waves of new refugees. He went into detail describing what a U.S. attack might look like, and what to expect in the region if such an attack takes place.

Replying to a member’s question on reunification, Dr. Noerper pointed out that there have not been many successful reunifications in modern history, and that “the two Koreas have been more distant than the two Germanies”. He added that we may be in a two to three state period for a certain time, and that reunification is not in China’s interest.

North Korea has been intimidated by recent U.S. action, and he believes that what we saw at the Olympics is very positive.  Despite his belief that Russia will increasingly be involved in any suction negotiations, he does not foresee that North Korea will abandon its nuclear capability. 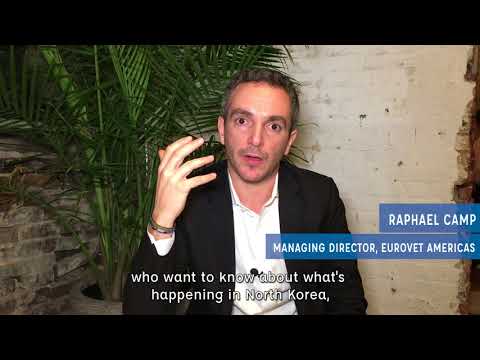