Forty-three participants from France and the United States gathered in San Francisco on October 18-21, 2017 to take part in the French-American Foundation’s annual Young Leaders program.

This year, Young Leaders from the classes of 2016 and 2017—a carefully-selected group of influential men and women from diverse sectors such as business, technology, government, and arts & culture—came together to discuss a wide variety of subjects and hear from prominent thinkers in the Bay Area.

Taking advantage of San Francisco’s dominant position at the center of venture capital and tech, participants heard from top Silicon Valley investors Ken Sawyer, Jeremy Liew, and Camille Samuels about the venture capital landscape.
The group also visited Twitter’s headquarters and heard from the platform’s Senior Public Policy Manager about Twitter’s relationship with the city of San Francisco and its role in politics.
In addition, the group learned about the new ways in which technology is being used to solve social problems from founders of tech startups, including Swiftly, Ava, Brigade, and BlaBlaCar.

While technology has a role in confronting problems, it can also create issues of its own related to gentrification, inequality, and high housing costs.
To understand the highs and lows of the influx of tech in San Francisco, the group toured the city’s Tenderloin neighborhood with Del Seymour, a lifelong resident and former drug addict who now works in conjunction with social agencies to improve the quality of life in the neighborhood. 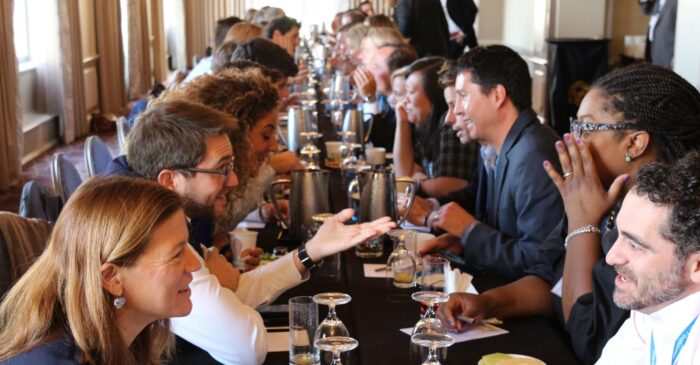